The gypsy moth is a serious invasive pest of hardwoods. A native of Europe and Asia, the insect was accidentally released in the United States more than 130 years ago near Boston, Massachusetts, and has now spread into the mid-Atlantic and midwestern states. Populations are cyclical, with periods of low abundance and periods of outbreaks. Since the first reported defoliation in Virginia in 1984, more than 5.3 million acres have been defoliated in the state, with treatment costs alone over $16.5 million. These suppression costs do not consider other costs associated with tree mortality, loss of tourism, and aesthetics, nor do they take into account the simple nuisance impact. 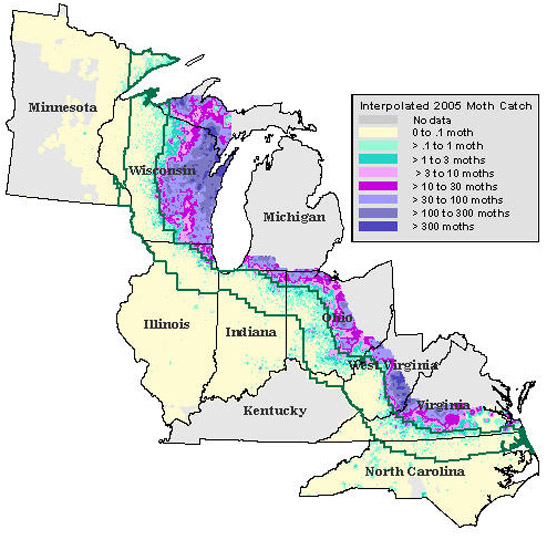 Interpolated gypsy moth trap catch in the STS project area. The action zone, where treatment activities occur, is outlined in green. The monitoring zone, where supportive sampling occurs, lies north and east of the action zone.

The Slow the Spread (STS) Project is implemented through the U.S. Department of Agriculture’s Forest Service with the goal of slowing the rate at which the gypsy moth is moving into new areas. Implemented in the “transition zone” between uninfested and generally infested areas, STS relies on intensive monitoring using pheromone-baited traps to detect building populations that can be eradicated or suppressed before they coalesce and contribute to the expanding front. The project involves nine states in addition to Virginia, two universities, and three federal agencies.

The STS Information System, with nodes in the Departments of Entomology at Virginia Tech and at Michigan State University, manages all database, GIS, decision support, and software development activities in the project. One focus of the information management group is to maximize efficiency by placing custom track updates made to GIS software solutions on the desktops of state cooperators while maintaining project level operations at one of the two database nodes. Below, important GIS components in the seasonal cycle of this large and complex project are highlighted.

During the spring and summer, trappers place and service approximately 90,000 traps within the STS area. Data are collected using either commercial GPS receivers or STS Trapper Gadgets that consist of GPS-enabled PDAs running custom software that references an internal STS mini-database. During the download process, GPS data are filtered through a desktop GIS viewer that allows trappers and supervisors to view their data spatially in relation to project GIS themes and imagery. Developed in ERSI’s MapObjects, TrapView performs simple tabular and spatial error checks and allows the user to correct data prior to submission to the Oracle® database (Figure 4). Supervisors submit GPS files to servers at VT or MSU where they are automatically loaded into the database and where more thorough error processing is performed. Cooperator access to the STS spatial and tabular database is through the STS Operations Web site (www.gmsts.org/operations) where ESRI shapefiles of GIS base layers, daily trapping data, and software updates are available. 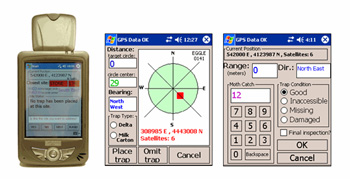 An STS decision support system (DSS) recommends, monitors, and evaluates project activities. Based on peer-reviewed gypsy moth population studies, the DSS was developed from scratch in C, C++, and Perl programming languages and contains its own GIS and Web delivery modules. It is driven by the trapping data, runs once each day during the survey and decision making seasons, and proposes activities such as increased monitoring or treatment. In the fall, STS managers review DSS recommendations in an activity referred to as the Road Show. During the Road Show, all DSS recommendations, as well as current and past treatment and trapping information, is loaded into a suite of custom ArcGIS applications (ArcInfo and Visual Basic for Applications code running under SDE). Managers then meet in groups by state, review both paper maps of the above information and the Road Show data resident in the GIS and projected onto a screen, and record the first draft of the actual project activities for the coming year. As managers make decisions, planned actions are digitized into the ArcGIS Road Show software. At the end of each meeting, state cooperators leave with a draft of their future activities as well as initial estimates of trapping areas, trap numbers, and costs.

In winter and spring, GIS operations at VT include processing treatment blocks and generating the trap site locations and their associated data. Sites are prepared for each state based on final Road Show outputs and loaded into the tabular database in preparation for the survey season. Proposed trap sites also are used at MSU to prepare custom trapping maps (usually derived from 7.5-minute DRGs), which are made available to requesting states. Management of treatment blocks is one of the messiest and most problematic tasks confronting the GIS. Considering local land use and land cover, politics, and ancillary moth population data, each state uses custom ArcView tools to edit the draft treatment blocks. Personnel at VT must track updates made to blocks for each of the 10 states and compile the results into a comprehensive master dataset. Keeping all states on task and consistent in this process is daunting, and development of an application through ArcSDE to address standardization and versioning of the treatment data is under way. Aerial treatment applicators rely on DGPS and on-board computers to direct targeting of compounds used to kill gypsy moth caterpillars or disrupt adult mating. Prior to application, the treatment blocks (ESRI shapefile format) are posted to the STS Web site where they are accessed by the applicators and loaded into the aircraft’s on-board GIS.

Decision making in STS has become totally reliant on GIS. The impact of this is evident in the efficacy of the program: Since its inception in 1993, STS has reduced the rate of spread of gypsy moth over 60 percent (from an historical average of 21 km/yr to a target of 8 km/yr) for estimated national costs savings of between $34 million and $264 million.

Manage Cookie Consent
To provide the best experiences, we use technologies like cookies to store and/or access device information. Consenting to these technologies will allow us to process data such as browsing behavior or unique IDs on this site. Not consenting or withdrawing consent, may adversely affect certain features and functions.
Manage options Manage services Manage vendors Read more about these purposes
View preferences
{title} {title} {title}