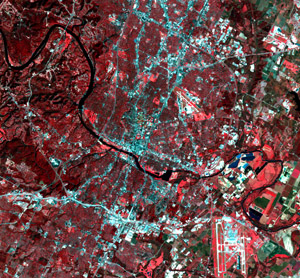 Description
NASA developed and launched the Landsat satellites, and the USGS handles the flight operations, maintenance, and management of all ground data reception, processing, archiving, product generation, and distribution. The legacy of Landsat satellites began in 1972 with the launch of Landsat 1. Since then, five other Landsat satellites have achieved orbit and acquired image data. For further information about the history of Landsat, see the NASA From the Beginning Web site and the USGS Landsat History/Characteristics Web site.

Two Landsat satellites are in orbit today, Landsat 5 and Landsat 7. The Thematic Mapper (TM) onboard the Landsat 5 satellite is a multispectral scanning radiometer developed by NASA. The TM sensor is an improved version of preceding MSS (Multispectral Scanner) sensors that flew onboard Landsat 1 through 5 satellites. For more information about the TM sensor, see The Thematic Mapper NASA Web site.

Imaging Suspension: On Oct. 6, 2007, Landsat 5 experienced an issue with one of the three batteries onboard the satellite. Imaging was suspended at that time to conserve power, and data acquisition remains off-line today. See the Landsat Project site home page and Recent News links for Landsat 5 operational updates. 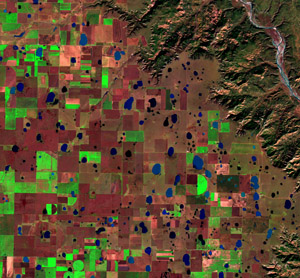 A false color composite (bands 742) of a Landsat 5 acquisition on Dec. 1, 2004. This subset, from path 30 row 36, is centered on an area of cropland, playa lakes, and a portion of Palo Duro Canyon. These features are located in the Texas Panhandle near Amarillo, Texas. The scale of the image is 1:100,000.

Image Degradation: On May 31, 2003, Landsat 7 suffered a permanent major failure with the scan line corrector (SLC), which accounts for the forward motion of the satellite. A subsequent data collection gap followed until July 14, 2003. Data acquired after this date, referred to as SLC-off, are severely degraded because major portions of the swath data are missing. A small section at the center of the swath (about 14 miles, 22 kilometers) remains intact during each collection in SLC-off mode. The areas of missing data, or gaps, increase from this center section to the most degraded areas at the edges of the swath. To learn more about the Landsat 7 SLC-off mode and view sample images, see the USGS SLC-off Data Products site.

Orbit
Both Landsat 7 and Landsat 5 satellites operate in sun-synchronous, near-polar orbits at about 705 km above the Earth.